RUSH: I just got the nicest note from Ed Morrissey at Hot Air, and he wrote about... He's entered a blog post, a blog entry on a suggestion that I made yesterday here behind the Golden EIB Microphone, and that is to skip the Senate Judiciary Committee hearings. Especially now that we've got the votes. McConnell says he's got the votes. Lindsey Graham says we've got them, and the count... 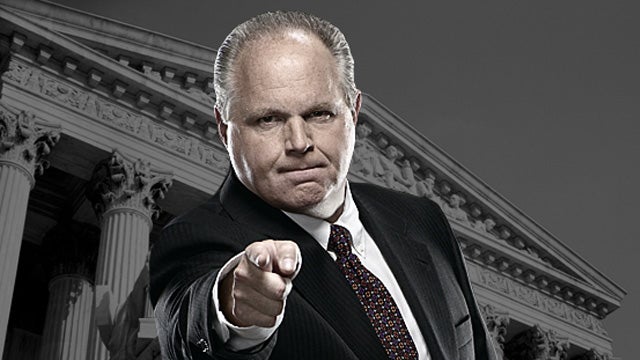 We've obviously got the votes; so what's the point of the hearing? The point I made yesterday is we don't need to open this up so that whoever the nominee is can be Kavanaugh'd, or Borked, or Thomas'd . And I didn't know this, but Trump himself retweeted my point this morning. "Rush Limbaugh calls for Trump Supreme Court nomination to skip the Judiciary Committee hearings and go straight to a floor vote," and they actually quote me accurately here.

That's a tradition that's evolved, but it is not required. There is no obligation, which Ed Morrissey also quotes and backs up. Now, the reason for his note to me. Morrissey says, "Look, I get your point, and I think it's a great point. I think it's a really brilliant point.

"But there's a part of me, Rush, that thinks that it could be very worthwhile to have the committee conduct hearings because the Democrats will so embarrass themselves that we could end up with even more votes for the nominee because the Democrats are guaranteed to go overboard on this and make fools of themselves, to embarrass themselves so thoroughly that they could lose even more seats."

I understand that temptation. You know, I myself am all for the Democrats informing everybody in this country who they really are. I'm all for the American people seeing in all their glory exactly the reprobates the Democrats can be as they set out to destroy a woman while claiming to care mostly about women and their plight and so forth and so on.

RUSH: I want to read to you the last couple of paragraphs of Ed Morrissey's post today in which he reacts to my suggestion that the Judiciary Committee hearings be dispensed with since the votes are there. Just do the vote and be done with this, confirm the nominee and move on. "In this instance," writes Mr. Morrissey, "the first impulse would be to keep the process as normal as possible, however.

"That would give political cover to the more vulnerable or less committed members of the Senate Republican caucus, especially those who are throwing in now on the basis of normalcy." Now, what he means, I think here, is go ahead. I can see it. We can eliminate the hearings. No need to turn this into another combat arena since it's not necessary to get votes.

And it would provide cover to some of the less committed members of the Republican caucus who are throwing in now on the basis of normalcy. Meaning: This has been an odd year. It's been one upheaval after another. Can't we just have some normalcy? And if we've got the votes, can't we just do the vote, get the confirmation done, and move on?

Why do we have to open ourselves up to another circus? "On the other hand, one has to wonder just how many Senate Republicans on the committee really want to provide Democrats with another opportunity for nationally televised character assassination. McConnell might do some of those a favor by getting Lindsey Graham to push for an immediate vote without a hearing."

So, "n the other hand, one has to wonder just how many Senate Republicans on the committee really want to provide Democrats with another opportunity for ... character assassination." Let's go back and look at Kavanaugh. Mr. Snerdley? (interruption) He's screening calls. How close did they come to derailing Kavanaugh? Seriously. How close did they...?

(interruption) We think that Kavanaugh was... I think they came dangerously close to derailing Kavanaugh. If Kavanaugh had not stood up for himself and taken out after the Democrats for what they were literally trying to do to him, if he had played it by the book (impression), "I will be polite. I will not allow these people to get a rise out of me," blah, blah, blah.

If he had just gone ahead and let this stuff happen and thrown it up, I don't know. They were working on Jeff Flake. They were working on all of them. Remember this? There was a full-court press on all these Republicans to do a new FBI investigation. Do we really want to go through this again? How close did they come to derailing Kavanaugh? In my memory, it's a lot closer than any of us remember.

But other than that, why...? Have we already forgotten the utter hell it was for Kavanaugh and his wife? So we're gonna open this up again. We're gonna subject one of our nominees -- who doesn't need the hearings, she's already... Whoever the nominee is, is already gonna have been vetted by this committee for her current judicial seat. She's gonna already have been vetted.

Why do we want to subject whoever the nominee is gonna be to another round of intense lies and distortions and character assassination and professional murder when it isn't necessary? I don't know, you know, how many Republicans might want to provide Democrats with this opportunity for nationally televised character assassination.

For example, let's look at Romney. Let's say Romney's vote is really reluctant here. His vote is not because he likes the nominees, or not because he's being understandably supportive of his own party's president nominating somebody very reasonable. Whoever the pick is, is gonna be eminently qualified. There will be no reason to not support the nominee.

But let's say Romney would really rather not because he doesn't want Trump to get anything that he wants. So what if we do hearings and somebody brings something up, raises some allegation. It wouldn't take much, and Romney would say, "I'm very troubled by what I heard in the hearings today. I might have to rethink, uh, the way, uh, I'm going to vote on this," 'cause you just know or suspect that this animus that these Never Trumpers have for Trump has not abated.

Their announced support for the nominee doesn't have anything to do with the fact that they've all of a sudden softened on their dislike and opposition to Trump. It has to do with either local political realities like Romney's constituents in Utah demanding that he vote for a nominee this qualified on these particular issues. Ditto, Cory Gardner, Colorado; Lamar Alexander, Tennessee.

But it's probably not because Romney is all of a sudden thinks, "You know, this Trump guy's not as bad as I thought. Look at this pick. Trump's got, you know, a greater future than maybe I thought." I don't think it's that. But then Ed says at the end of his piece, "At the very least, it would be one less circus in a year with more clowns than usual," meaning all of 2020. "But one does also have to wonder whether it might benefit Republicans to allow Democrats to get shown on television going full nutter just days before an election. That might be valuable in itself."

Okay. They Borked Bork, and they denied him his seat. They attempted to Bork Thomas, and look what it took for Thomas to get confirmed. It was a nightmare, and I don't think that Clarence Thomas would want to relive any part of it -- and Kavanaugh, ditto. There were also attempts... We've forgotten. They reduced Sam Alito's wife to literal tears in the confirmation hearings, and then they started making fun of her for crying as not being a strong enough political wife.

She was reduced to tears over the lies they were telling about her husband. Now, I understand the temptation to have Democrats go nuts on a woman. I can understand it. I've even said to friends, "I would love to see them go nuts and try to destroy an Hispanic female in an election year." But the thing is, folks, they'll do it. You have to assume they will do everything and then more than you can even conceive of.

It's not a question of will or if, maybe, or might. They will. They will do whatever they can and then some to destroy whoever this nominee is. And they won't care a whit about the fallout. They'll have to do it to satisfy their lunatic base. If their behavior during hearings results in them losing national support, Biden losing support, it won't matter if -- in their minds -- they've placated their base.

That is first and last a requirement that they all, on the Democrat side, feel. From Chuck You Schumer on down to Amy Klobuchar, they've got to satisfy the base, and that means the attempt to destroy whoever this nominee is -- and I mean literally destroy. When it's over, they want to quit. When it's over, they want to slink away and never, ever again go to their work, go to their jobs, and never, ever again want to go through any of this.

That's what it means to try to destroy a nominee -- and do not look at it as a possibility, as a maybe.

It will happen if there are hearings.

RUSH: Now, look, folks, do not doubt me on this. The Democrat Party, they're the ones threatening to abolish the Electoral College. They are promising to pack the court. They are threatening all this stuff too. They're gonna add Puerto Rico and the District of Columbia as states, adding four new Democrat senators in perpetuity.

These are the people that impeached a president in an election year. They slimed Kavanaugh. And I don't know what you all remember, but it was close. They came close to derailing that nomination. And they were working on Republican senators to soften and change their votes. Remember the picture we've shown you of Dianne Feinstein bullying Lisa Murkowski? We had Chris Coons, that bald-headed little guy from Delaware. He was harassing Jeff Flake, although it didn't require much harassment.

I mean, now they're out there threatening to riot and burn down the country if they don't get their way. Well, screw them. But my point is, you give them the chance with Judiciary Committee hearings, and they will not disappoint. They will go as low as they have to for as often as they have to. It's who they are. And we've already seen it. We already know who they are. We already know what they're capable of. We don't need for the American people to see it again. They saw what happened to Kavanaugh. They haven't forgotten it.