RUSH: Grab sound bite number 2. Romney, Capitol Hill today. He was also on Fox Business. But I think this bite is from CNN. Yeah. Yeah. Here's what he said. This was CNN with Manu Raju. Manu Raju sounds like that Italian sauce company. "Back in 2016, the message from the Republican Party was, let the voters decide. Why is it appropriate now to not let the voters decide?" I want to see what Romney says.

ROMNEY: At this stage it's appropriate to look at the Constitution and to look at the precedent which has existed over -- well, since the beginning of our country's history. And in a circumstance where a nominee of a president is from a different party than the Senate, then more often than not the Senate does not confirm. So the Garland decision was consistent with that.

On the other hand, when there's a nominee of a party that is in the same party as the Senate, then typically they do confirm. So the Garland decision was consistent with that. And the decision to proceed now with President Trump's nominee is also consistent with history. I came down on the side of the Constitution and precedent, as I've studied it, and make the decision on that basis.

Last I looked, the 2016 is the most recent election where the voters decided. The 2020 election has nothing to do, Mr. Raju, with this Supreme Court vacancy. Nothing to do with it. The voters have decided. They voted for Donald Trump to fill Supreme Court vacancies in 2016. And, lo and behold, we've got one now. And, lo and behold, we have enough Republicans who realize that, that we have the votes to confirm the nominee, whoever she ends up being.

But this is one of the things they're trying to do, is to say that voters are being denied the opportunity to weigh in on this, that for some reason we need to wait 'til the next election since we're so close to it for the voters to decide. Voters are already decided. This vacancy occurs during the presidential first term of Donald Trump. According to the Constitution, he gets to fill the vacancy. He gets to fill it. He gets to nominate the vacancy. The Senate gets to advise and consent. And they are going to do that. 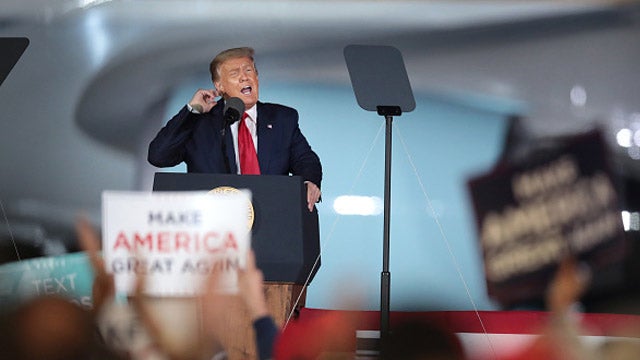 So they can try to distort this all they want, but they don't have a way right now via votes to stop it. Even the Washington Post: "Democrats Largely Powerless to Stop the Republicans from Confirming Court Choice."

Trump's approval numbers ticked up to 48% in the Harris-Hill poll. They have another story here from the Wall Street Journal, James Freeman, Pelosi promising that her quiver was filled with arrows, this past Sunday. James Freeman says her quiver is empty. There aren't any arrows in it. She doesn't have any ammo. There is no way to stop Trump's nominee. The Democrats don't have the votes. The House has nothing to say about it in the first place, which is where Pelosi lives. The Democrats in the Senate don't have the votes.